Business decisions making is the process of gathering the required data and evaluating that information through various statistical and financial tools in order to take strategic decisions (Black, 2011). Syngenta is a world's leading company operating in around 90 countries with the availability of 28000 workers. Its purpose is bringing plant potential to life. In the present report, the importance of business decision making will be discussed in respect of Syngenta's success.

Want to Hire Expert Writers? Writing different academic papers can get puzzling at times. Reach out to the best writers of Global Assignment Help and ask for assistance with all types of essays, assignments, reports & more! Order Now

Q.1. Launching of Amistar as well as data collection through survey methodology and sampling frame

Amistar is a fungicide product that makes a huge contribution to integrated pest management. Currently, Syngenta's director decides to launch Amistar in a new market. Therefore, India will be an appropriate country for such expansion. It is because almost 70 percent of the Indian population is engaged in the agriculture sector (Bazerman and Moore, 2012). Due to this, there is a great demand of fungicide products for the protection of crops.

Data collection: It is the primary need of the decision-making process in which the researcher requires to collect both the primary and secondary information. Primary data is also called as raw data because it is collected by the investigation for the first time and every researcher needs to collect primary information for their specific objectives. It can be collected through personal investigation, surveys, and other related methods. However, secondary information is available directly, so the investigator does not need to collect it from the market surveys (Sutherland, 2010). Previous records, articles, trade reports, economic reports, published government reports, internet, newspaper, books and magazines are the types of secondary data collection sources.

Survey methodology: It is a way of primary data collection in which the investigator of Syngenta can conduct market surveys in order to gather the required information. It is the best way of collecting information about consumer behavior, their preferences and future demand of Amistar in India (Kline, 2010). A questionnaire is an effective tool in which the researcher can design various open and close-ended questions for collecting necessary data as well as information.

Sampling frame: It is not possible for Syngenta's manager to study the whole Indian market. Hence, he can use the sampling frame in which an investigator can construct an adequate size of a sample by combining all the characteristics of the universe. Thereafter, information can be collected by communicating with respondents who are considered as a sample for the study. Thus, it minimizes the cost of data collection and saves time.

Mean, mode and median are central tendency measures that provide useful information about the data series.

F1 = frequency of the mode group

F0 = frequency of the previous group

F2 = frequency of the next group

On the basis of the above information, it can be said that approximately £33.07m of expenditure will be incurred in the upcoming period. However, a median value of £30m tells that half of the total potential expenses will lie under the maximum limit of £30m. However, the mode of £24.44m indicates that in many countries, future spending will be equal to £24.44m.

Besides the central tendency, dispersion measures the scatter and spread of the whole series. In the context of the present scenario, it helps to measure the difference in future annual expenditures in various countries (Zhang, Jia and Zhang, 2009).

Standard deviation is the square root of variance =

In conclusion, a range of £70m indicates that future annual expenditures in the countries in which Amistar can be launched will fall from zero to £70m. Thus, if Syngenta launches Amistar in India then maximum expenditures will be £70m.

Quartile and percentile: Quartile is denoted as Q that measures the expenses which fall under the range of 25%, 50%, 75% and 100% of the total future expenditures. However, every percentile measures the total spending that lies under a specific percentage group.

Correlation: As the name suggested, it measures the relationship between two interrelated data series (Aiken and et.al., 2008) In context to the present scenario, the correlation has been computed between sales and profit in the Japanese market. 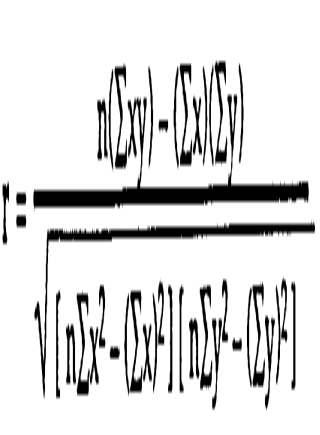 The correlation coefficient of 0.89 indicates that both the sales and profit are highly related to each other. As sales increases, profit also tends to increase and vice versa.

Column charts and bar charts have been prepared here to analyze data related to sales, cost, and profit in the context of the Japanese market. 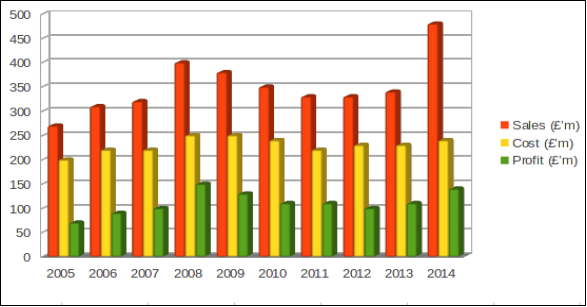 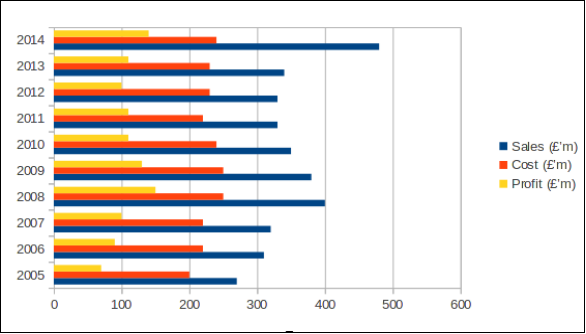 Graphical presentation of data enables the line managers to analyze all related information about the Japanese market (Galtarossa and et.al., 2008). The graph shows that sales, cost, and profit are fluctuating over the period. Sales increased up to £400m in 2008 and thereafter, declined for five years. However, in between 2013 to 2014, it increased from £340m to £480m. On the contrary, the cost was increasing till 2009 with the highest limit of £250m. After that, it moved in a favorable direction and started to decline as, in 2014, it was £240m. Due to this, the highest profit was in 2008 amounted to £150m. Thereafter, it went to fall from £130m to £100m till the year 2012. On the contrary, in 2013 and 2014, it inclined to £110m and £140m because of high proportional changes in sales. In accordance with this chart, it is recommended that Syngenta’s manager has to construct policies and take decisions so that sales and profits can be increased.

Trend lines: It is a line used to forecast future market trends by evaluating historical occurrences (Li and et.al., 2012). With the help of constructing a trend line for sales and profits, Syngenta's manager can forecast that it will move in a favorable or adverse direction in forthcoming years. Such line for Syngenta is presented below: 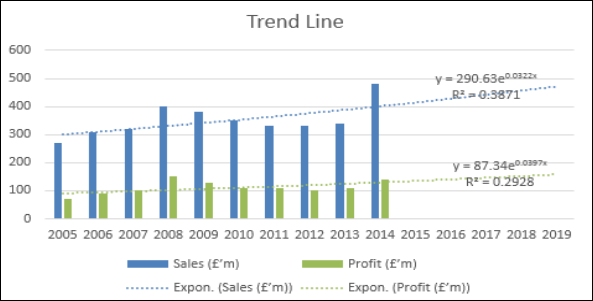 The upward direction of the trend line tells that in future years, Syngenta will generate more revenues and profitability (Robertson and et.al., 2008). It demonstrates that a firm will earn high sales and profitability in the Japanese market. In other words, it will perform better in the upcoming period.

Q.1Preparing a Gantt chart and stating its benefits.

Line manager of Syngenta is planning to set a new warehouse with an aim to store various products before selling it in the market (Brandt and et.al., 2010). Therefore, in regard to this, the manager has taken into consideration various activities.

Gantt chart is one of the significant tools that is used by the organization with an aim to examine the starting and finishing time of all the activities that take place within a specific time in the organization. After using this tool, the manager of Syngenta will able to analyze the time period required for preparing the warehouse. This chart indicates a separate bar for all the activities.

Some of the benefits of Gantt chart are as follows:-

Therefore, in the end, it can be said that the preparation of the Gantt chart is very important for every organization as by using this chart, the company is able to examine the time period required to complete a particular task.

Network diagram is one of the beneficial tools that is used by almost every organization (Network, Gantt chart, and critical paths,2001). On the basis of this diagram, management is able to examine the relationship between all the activities that are going to take place. 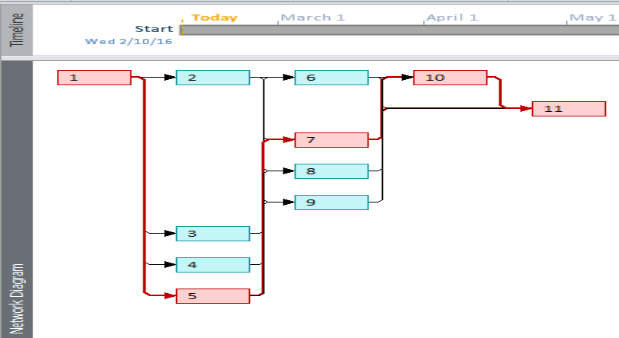 A critical path that is going to take place while constructing the warehouse.

On the basis of the above computation, it can be concluded that Syngenta should move on with critical path B. The reason behind this is that by using this, the company will be able to complete the construction project in 233 days only. While, if they move on with path A, then, in that case, it will take 261days.

This method is used to analyze the time period after which the company will going to regain the amount of capital invested by them (Götze, Northcott and Schuster, 2008).

As per the above computation, it can be interpreted that Syngenta should move on with the proposal given by Inverness because it will take less time to recover the invested money.

On the basis of the above calculation, it can be suggested that Syngenta should move on with the proposal offered by Inverness as by using this, the company will be able to generate more NPV of 158.28 which is high as compared to the proposal of Grangemouth which is 156.91.

According to the above computation, it has been found that the ARR of both the proposals is equal such as 0.56%. Therefore, after using all the three techniques, it is suggested that Syngenta should move on with the proposal offered by Inverness.

In the conclusion of the above report, it has been stated that Syngenta has to launch its product such as Amistar in the Indian market. It will bring the number of opportunities for the business and contribute to high growth in business performance. Moreover, the report has been concluded that in upcoming years, the Japanese market will generate more revenues and profitability. This, in turn, Syngenta's operational performance will be enhanced. In last, the report has described that the Gantt chart and network diagram are useful tools for warehouse project management. It enables a manager to construct a warehouse within set time period. However, under the capital expenditures, investment appraisal tools have explained that Syngenta should accept the Inverness proposal because of greater NPV, ARR and lower PP.