Data and information are used and analysed for effective decision-making in an organisation. The main aim of this project report is to build an understanding about techniques which helps in analysing an organisational data which can further used for decision making and problem solving. In this project report, a case scenario is followed in which a management trainee analyses information of Duque Papertiers Gros and suggest them ways to expand their business activities. Information such as product data, customer data and financial data is analysed in this report to present reliable conclusions and recommendations using graphs and tables (Bertot, Jaeger and Hansen, 2012).

Overview of the wholesale stationers market in Germany

Germany is considered as one of the most influential economies of the world. Main reason behind their success is their high GDP which is a result of high consumer market of this nation. Wholesale stationers market of this country contributes billions to GDP of this economy. The most impactful cause due to which productivity of this market decreases is the number of school age children. Current sales of stationary industry are approximately 15 billion annually which is reduced by 30% in past 10 years. The German wholesale stationary industry has decreased in past ten years due to which several market players has migrated their business towards other sectors. Total number of specialised retailers in this sector are 5000 approximately. There are four main factors related to market which affects stationary market. First factor is convenience, in this factor, many market players are involved in multiple practices such as selling stationary stuff along with tobacco which is considered as inappropriate. Second factor which affects stationary market is intense competition. According to this factor, there are various market players involved in due to which consumer share divides and few of the small players face problem of low profitability. Third factor is demand for these items and forth factor is number of school students (Fortier-Brochu, and et. al., 2012).

According to the trends in stationary market it has been analysed that turnover is raised by 3.5% which has enhanced international economic environment. Trends in this industry which has been seen in past few years is that demand has been increased but with a declining rate. 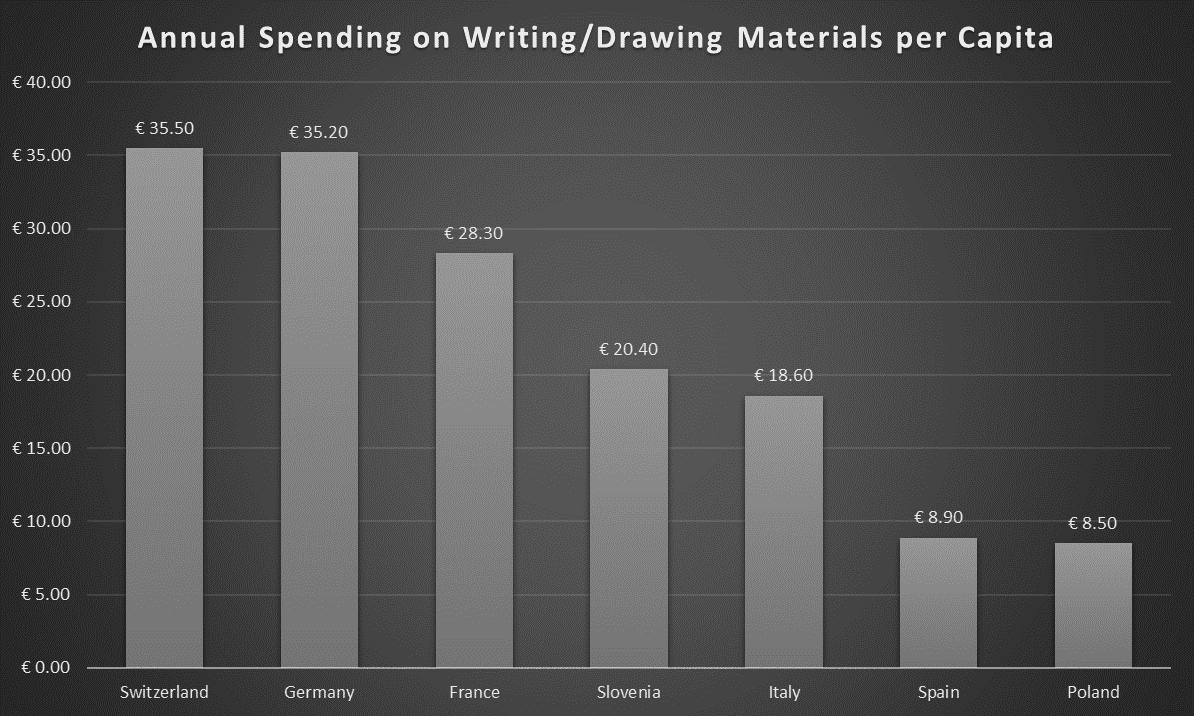 The above graph is developed using data of Malaysian-German Chamber of commerce and industry. This information states data for annual spending from the consumers of different countries. From the above graphical representation of annual spending it has been analysed that Switzerland is earning highest amount of GDP by stationary industry as they have highest consumer spending. German has second highest ranking with 35.20 pounds spend by consumers on stationary units annually. The reason behind this high spending can be high population of Germany. Third rank is allocated to France, next to Slovenia, Italy, Spain and last as Poland. Annual spending of Switzerland is larger than four times of Poland. There are two reasons for these variations which are uneven population distribution and high rate of students in Germany and Switzerland.

a) Tabular analysis of information

Above data represents total sales which is made by the company. In the year of 2016, this company has earned highest amount of sales revenue and writing/drawing materials are seen to be highest profitable.

b) Developing mixed pie chart representing sales of 2016 and 2017 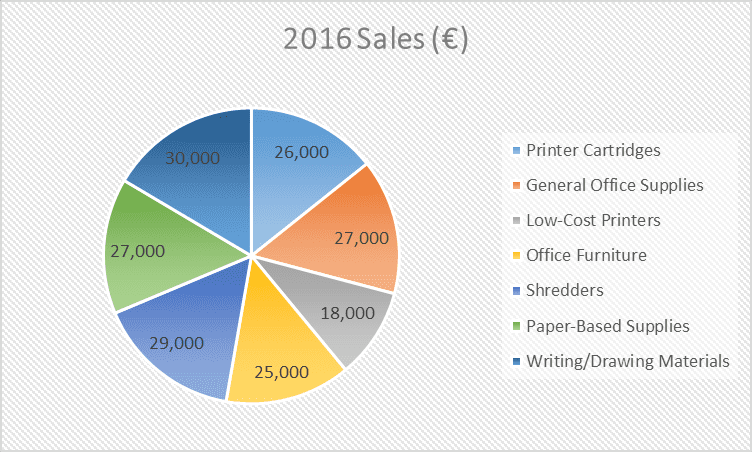 Above pie chart represents that this organisation has maximum sales from writing and drawing materials and minimum sales from low cost printers. Other categories are classified as printer catridges, gneerla office supplies, office furniture and others. 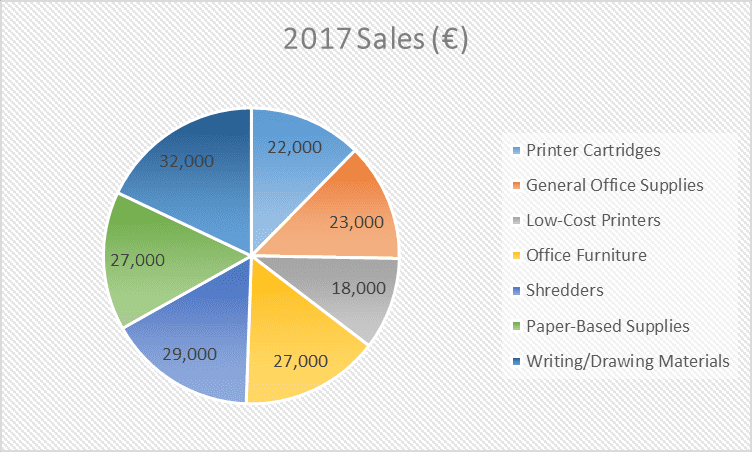 From the above pie chart, it has been analysed that maximum sales is attianed from writng and drawing based materials that is 32000. And lowest sales are acquired from low cost printers that is 18000.

A correlation coefficient is a statistical measure which states relation of one variable to another. Correlation variables are two types that is positively correlated variables and negatively correlated variables. In case of positive variables, values increase and decrease in tandem. In case of negative variables, if value of one variable increases it leads to declining value of another variable (Green and Salkind, 2016). From the above scatter diagram, it has been seen that there is a positive relationship between both the variables that is years and sales. Correlation coefficient is measured using MS Excel which is presented below:

From the above ascertainment of correlation coefficient it has been seen that correlation between years and sales revenue of this company is 0.7313 which is close to 1. So it can be said that these variables have positive relationship between each other. 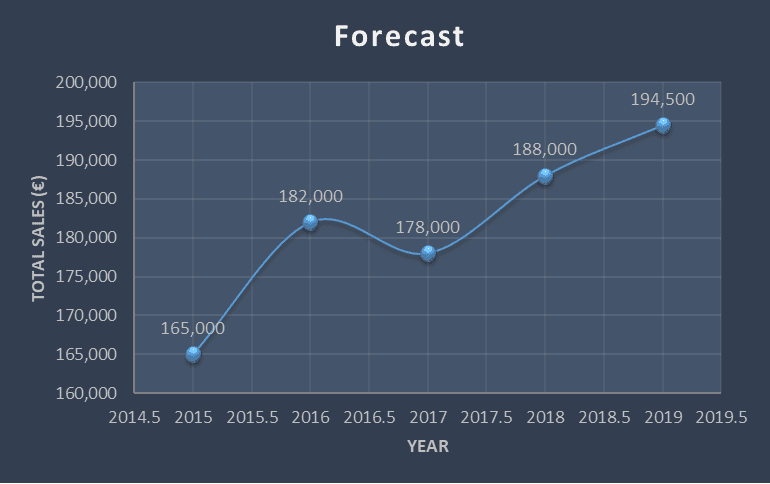 From the sales revenue of years 2015, 2016 and 2017, predictions for 2018 and 2019 are done. From the above graph, it has been observed that sales revenue of this company is showing increasing trend due to which sales are increasing every passing year. This forecast is done by considering that increase in sales between year 2014 and 2015 will be followed by precceding years.

a) Completing the table

The above table is completed using method of pros and cons in which all the positive aspects are provided marks and presented at the left side of the table. All the negative aspects are recorded and presented at the right side of the table (Harrell, 2015). From the above table it has been ascertained that aspects due to which Duque Papetiers Gros. Should expand their business are their logistics activity, euro currency, e commerce and more. It has been seen that average rating from all the pros is determined as 8.71. This average is ascertained from the total marks of pros as 61. In the case of cons, total marks as cons are determined as 42 from which average of 6 is ascertained. Average of pros is more than average of cons that is 8.71 and 6 which states that this company should make efforts to expand their business operations outside Germany.

According to European Union, it is compulsory to provide a safe and reliable environment to all the organisational employees. There are five standards shortlisted which has to be considered and met by Duque Papetiers Gros and they are mentioned below (ISO, 2018):

a) Calculating monthly cost of

From the above determination of monthly payment of mortgage, it has been ascertained that client has taken interest only mortgage (Jin and et. al., 2015). It is a kind of loan which in which person only asks for interest value to be paid every month. In order to calculate monthly payments of loan taken by Duque papetiers Gros, MS Excel is used and formula of PMT is used. From applying this formula, monthly payment of 1755.14 pounds is ascertained.

Using the value of APR, monthly payments are determined below:

Where, A = Amount of Mortgage

From the above calculation, it has been ascertained that if Donald uses the concept of APR, monthly payment will be high that is 1831.26 pounds.

From the given scenario of Donald, it has been ascertained that Donalds believes that his company will receive monthly mean value of orders as 240. This assumption is considered as reliable but he thinks that this assumption is providing incorrect mean value (Landauer and et. al., 2013). A hypothesis is developed which is mentioned below:

Information which is used to ascertain mean order is presented below:

In order to gain an absolute answer, standard error will be rounded and will be equal to 6. Along with this interval acceptance which is considered is:

By calculating and taking assumption for variables, it has been ascertained that mean value of sample will be 240 pounds. In addition to this 95% of the random sample lies within the interval and from which it can be concluded that Donald assumptions are relevant.

From the given case scenario, it has been ascertained that December is not considered as good period of time to send questionnaires to their clients for feedback. Average of 5% questionnaires are considered that will be expressed. In order to attain better solution for this organisation, brainstorming is a method which should be done. This organisation can change the period of the year for feedback forms and should also make efforts to complete this questionnaire (Menke, 2018).

b) Suggestions on cause for concern

From the above table, mean is calculated by using formula which is mentioned as follows,

From these ascertainment, it has been suggested that this company should advertise their product and invest their funds in advertising campaigns.

From the project report it has been concluded that German industry is overall generating high revenues due to opportunities and positive market trends. Dynamic nature of German market can result into challenges for Duque papetiers Gros. By analysing company financial status it can be concluded that they should expand their activities outside Germany and for which they should invest their resources in advertising operations.