Branch of science which is associated with properties and nature of energy as well as matter is known as physics. It comprises of heat, mechanics, radiations, and light. Basically, it is a science that deals with energy and matter along with processes which takes place between them as each have their own physical properties as well as composition. This report will cover connection among motion and force, conservation of momentum & energy and wave motion. Apart from this, behaviour of light and magnetism as well as electric circuits are also illustrated.

Difference among velocity and acceleration

Velocity refers to vector expression of displacement that an particle or object undergo with respect to time. It denotes rate at which object alter their position. Accelerationis defined as rate of alteration of velocity with time. It is overall outcome of forces which acts on object.

Newton's law of motion and their implications

There are three laws which are given by Newton. They are:

Newton's second law of motion states that“When force acts on objects, it will make object to accelerate. Larger will be the mass of object, great force will be needed to cause acceleration. This law is given as: F = m*a.

This can be understood by an example, if a ball is rolling down in a hill then force of gravity will act on same direction which will accelerate the motion. But, if opposite is done then force applied will be in opposite direction.

Newton's third law of motion states that “To every action there exist equal as well as opposite reaction”. For an instance if an individual steps off a boat on shore then boat will tend to move within opposite direction.

There are assorted forms of energy like light, heat, gravitational, electrical, chemical, sound and many others. But there are most specifically two form, they are:

Kinetic energy is form of energy which a particle or object possess due to motion. It can be understood by an example like if an object is accelerated, then some force is applied to do work. When work is done then energy will be transferred to object while moving within constant speed. The energy which has been transferred is referred to kinetic energy.

Potential energy refers to energy which is possessed by an object due to their positions with respect to other object. For an instance, a rock which is present at top of cliff have certain potential energy but if it falls from the cliff then this energy will be converted into kinetic energy.

Principle of conservation of energy and their implications

As per law of conservation of energy, energy can neither be created nor be destroyed. But it can be transformed from one state to other. Total energy of isolated system will always remain constant. It can be understood by an example like within electric bulb, electrical energy is transformed into light and then to heat energy. Another example can be taken into consideration like within bicycle pump, mechanical energy transforms to heat energy this makes pump heated up. When gas is compressed, then mechanical work will be regenerated into heat energy. It will lead gas to expand, it does work and temperature falls when energy is utilised.

Momentum and laws of conservation of momentum

Momentum is defined as a vector quantity which is product of velocity and mass of an particle or object. It processes magnitude as well as direction within three dimensional space. Suppose if v is the velocity (which is a vector) and m is mass of object, then momentum is given as: P= m*v

Laws of conservation of momentum states that momentum of an isolated system of two or more than two interacting bodies will remain constant. It is defined as principle within physics which states that some parts within isolated system remain steady as well as unchanging with respect to time. For an example,

Wave refers to disruption within a medium which possess energy without particles movement. It may be within forms of elastic deformation, electric potential, magnetic or electric intensity, variation of pressure or temperature.

Difference among transverse and longitudinal waves

Ways in which water and sound waves are reflected, diffracted and refracted.

Reflection: When linear object is connected with an oscillator bobs in back and forth direction in water then straight waves are formed. These waves cause irregular crests as well as troughs. They will be travelling through water until any kind of obstacle is encountered, the waves will be reflected in such a manner that angle at which barriers is approached then this is equal to angle at which they reflect off barrier.

Refraction: It involves alterations within direction of waves as they travel from one medium to other. Bending of the path of waves or refraction, it is accompanied by alterations in speed as well as wavelength of waves. Water travels fastest within medium when they are deepest.

Diffraction: It comprises of changes within direction of waves as they pass through a barrier or opening within path. Water waves possess ability to travel through obstacles and openings. The amount of diffraction will increase with increasing wavelength and vice-versa.

Refraction: Bending of waves comprises of alterations within direction of waves from one medium to other. It is convoyed by change within speed as well as their wavelength. Refraction of sound waves passes via a medium with gradual varying properties.

Diffraction: It involves change within direction of waves when they pass from opening or near a barrier within a path. Diffraction of sound waves are observed around corners and through openings which allows an individual to hear.

Principle that when radar pulse, ray of light are reflected from smooth surface then the angle of incidence is equal to angle of reflection. If ray of light is observed approaching and reflecting off a flat mirror then behaviour of light reflects that is called law of reflection.

The refracted, normal and incident rays to interface transparent media at the point of incidence which lies within identical plane. The ratio of sine angle of refraction to sine angle of incidence is constant for light of given colour for given pair of media. This is also referred to as Snell law. It is given by: sin i/ sin r = constant (Refractive index) = n. 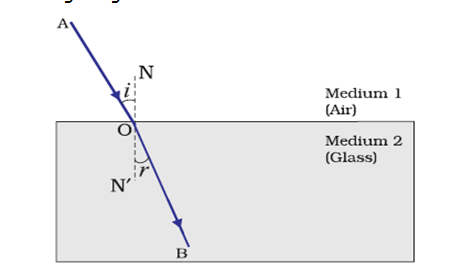 (Source: Laws of refraction of light and refractive index, 2016)

The phenomenon which comprises of reflection of all incident light off the boundary is referred to total internal reflection. It occurs only if two conditions are met, they are specified below:

Nature of magnetism and their laws

Magnetism is group of phenomena which is associated with magnetic field. They can be witnessed when flow of electric current exist. This arises due to certain factors like, orbital motion of electrons, magnetic moment of atom that forms magnetic field and spin of atomic electrons. Laws of magnetism are illustrated below:

Along with this, magnetic effects are also there like when magnet is broken into pieces then each piece becomes individual magnet with alternative poles. The law of magnetism refers to retention a long bar magnet to retain their magnetism longer than as compared to short bar magnet (Law of magnetism, 2019). 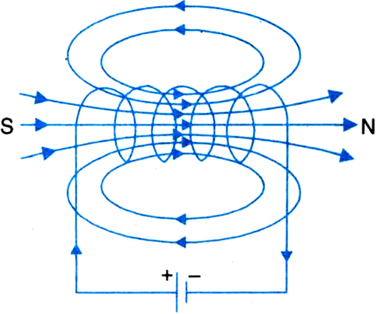 Explain current as well as potential difference among them within series and parallel circuits.

Series circuit refers to a circuit in which all the elements are in series with identical current but their voltage drops can vary.

Parallel circuit is defined as circuit where elements are in parallel with similar voltage but their currents are not same. 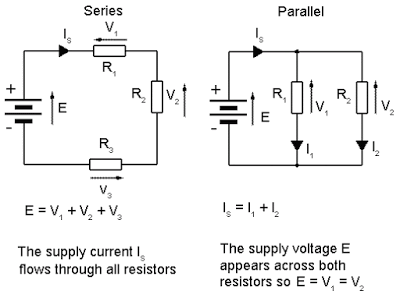 From above it can be concluded that, physics is a science which deals with study of force, motion, energy and matter. Velocity refers to speed of an object for changing their state. There exists a diverse law of Newton which explicates certain concepts like to every action there is equal and opposite reaction. There laws are there which explains the concept of nature.