Economics can be described as field of science that provide description of factors which affects production, consumption and distribution of goods and services. The present study is based on the evaluation of basic principles of economics (Bold and Vega, 2003.). In this report, description will be provided regarding, impact of increase in consumers will be described on the equilibrium price and quantity of product. Further, computation of the Consumer Prices Index measure of inflation will be provided.

A: Impact of an Increase in Customers on Equilibrium Price and Quantity of Product

Table 1: Changes in Equilibrium Prices Due to Demand Curve

Table 2: Changes in Equilibrium Prices Due to Supply Curve

Equilibrium can be defined as a point of price at which supply and demand of quantity of product is equal. At the point of equilibrium, there is no change in the price of product because quantity supplied to the customers is equivalent to quantity provided by the customers (Brooks, 2002). With the change in economic factors there is also change in the point of equilibrium. It is because; there is direct change in supply and demand point. This aspect can be noticed by the following table:

Impact of Increase in Customers on Equilibrium Price and Quantity

Supply in economics represents the quantity that can be offered by market on particular price. Correlation between price and quantity provided by the supplier is known as supply relationship (Cardoza and Fornés, 2011). Relationship between demand and supply, provide optimum allocation of resources in order to attain the point of equilibrium. Law of demand states that customers will make high demand if price of the product is reduced. Vice versa impact can be noticed if there is increase in the price of the product. Law of supply stated that, suppliers will sell high quantity at the increase in price and low quantity if there is decrease in the price. 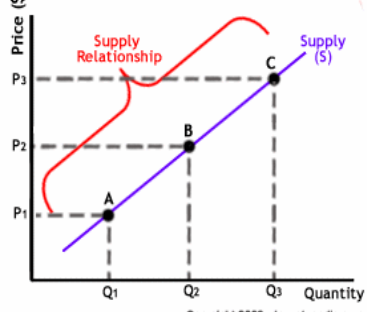 In accordance with this illustration, it can be noticed that with the increase in number of customers there is simultaneous increase in the price factor. As a consequence, equilibrium point of quantity is shifting upward from point A to B to C. This aspect shows that with the increase in customers, suppliers will tend to provide high quantity for the satisfaction of the demand. However, to attain the point of equilibrium price of product will also be increased (Ceccherini-Nelli and Priebe, 2007).

With the increase in customers, there will be increase in demand and consequently equilibrium point will be increased. For example, at present there are 30 customers of the product then 3 quantity is demanded in the market. Now, if number of customers is increased up to 40 then demand of the product will also be increased. In this situation supplier will provide product at the higher price in order to mitigate the demand. Due to this aspect equilibrium in price will be achieved at the higher point.

This discussion can be explained with the help of an example by taking products who are substitutes to each other. Milk and cornflakes both have direct relationship to each other as when price of milk increases, demand diminishes and this ultimately reduces the supply of milk.

On the other hand, when price of the milk reduces, its demand increases and that further enhances supply ratio. Relating it to cornflakes, the demand of cornflakes increases at the time when price of milk is declined and people will purchase the same product in higher quantity. Thus, it reflects that when price declines, level of quantity demanded increases of primary and substitute both the products. 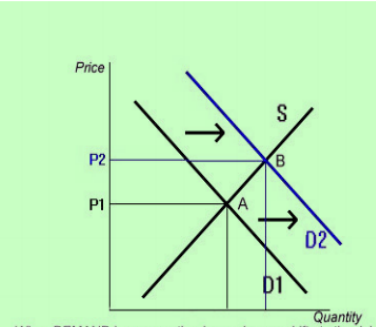 In accordance with the provided illustration D2 shows increase in demand due to increase in quantity. In previous market situation, equilibrium was achieved at the “A” point but with the increase in quantity demanded there is right ward shift in demand curve (Dittmer, 2005). Due to this aspect, price of product provide by the supplier is increase. As a consequence, equilibrium price in the market is shifted from point A to B.

B. How Consumer Price Index Measure of Inflation is Calculated in the UK

Consumer price index is regarded as the official measure of inflation of consumer prices of United Kingdom. It is considered as an weighted price index through which level of inflation prevailing in the economy can be measured easily (Dowling, 2009). Further, inflation has direct impact on the cost of living and has directly influenced the purchasing power of people living in the society. It is leading to decline in power of purchase and is having adverse impact on every individual. Moreover, in country like UK entire economy has been affected due to inflation and due to this basic reason consumer price index is determined. At present consumer prices in the UK dropped by 0.1 yoy in October and it is in line with the expectations of the market. Further, in the first time consumer price index has fallen for two months as cost of food reduced and overall oil prices keep dragging transport cost down (Dutta, 2006). Average rate of inflation in the country like United Kingdom is 2.67 percent from the year 1989 until 2015. Further, the key categories in the consumer price index are transport with share of 16.2%, water, electricity, gas and fuels. Further, culture accounts for 11.2% and index also takes into consideration clothing and footwear, miscellaneous goods and services, household equipment and maintenance etc (How is the Consumer Prices Index calculated. 2013).

Retail Price Index measure of inflation in UK is the adequate way of evaluating the extent to which workers are affected by the changes held in the First World War (). In order to manage inflation rate, the cost of living needs to be considered on the basis of general price level. Thus, the rate of inflation can be measured by the annual percentage according to which changes occur in consumer prices. It has been observed that the British government has determined an inflation target rate of 2% afterwards using the consumer price index. Further, in the context of UK, Bank of England is entitled to determine interest rates for the purpose of controlling aggregate demand in the economy (Inflation: How Is It Measured, 2015). Further, inflation pressures are subdued and on that aspects inflation target can be adequately managed.

The Bank of England is independent entity according to the government since it controls interest rates and the major reason is also that no political intervention are present in this scenario. The Bank is considered as the adequate measure through which price deflation can be managed. Further, for the purpose of calculating the cost of living of consumers, average price needs to be calculated according to the buying ability of the consumers. RPI further includes cost of housing and CPI does not include such things because the major emphasis here is given on buying behaviour of the consumers (UK inflation rate turns negative again, 2015). RPI is considered as an arithmetic means because prices of everything can not be included in it and it can be simply added in the list merely by dividing the number of items. Therefore, CPI is also called a geometric mean and it is further calculated by multiplying the prices of all the items together, then afterwards it requires to take the nth root of all the calculated items.

In accordance with the present study it can be concluded that, equilibrium in the market is directly affected by the supply and demand factors. With the change in these curves, equilibrium point will also be altered. Increase in customers will make increase in demand and consequently supply will be increased. Due to this aspect, point of equilibrium will be attained at higher price. Further, calculation of consumer price index assists in knowing the level of inflation and through this economic condition of UK can be known easily which is fruitful for the entire nation. Moreover, this index only assist in calculating the prices changes and does not considers price level.