Hope everyone is doing well with their academic tasks and other tests. Today, in this blog, we will broadly study the narrative conventions, their elements, and why they are necessary.

Students may study this topic in their course material as it is the main subject of English literature. That's why the experts of Global Assignment Help are here to provide you with an overview of the various elements of conventions.

The techniques of literature writing are referred to as Narrative conventions. Many writers use it to create a better meaning in a story. There are many elements that come under narrative writings. They all help to understand the plot, genre, and characters of the story.

Primary are the basic ones that make a direct impact on the literary text, and its parts that are also impactful, but not throughout the text.

Let's have a look at all the parts in detail.

11 Elements of Narrative Conventions with Effects 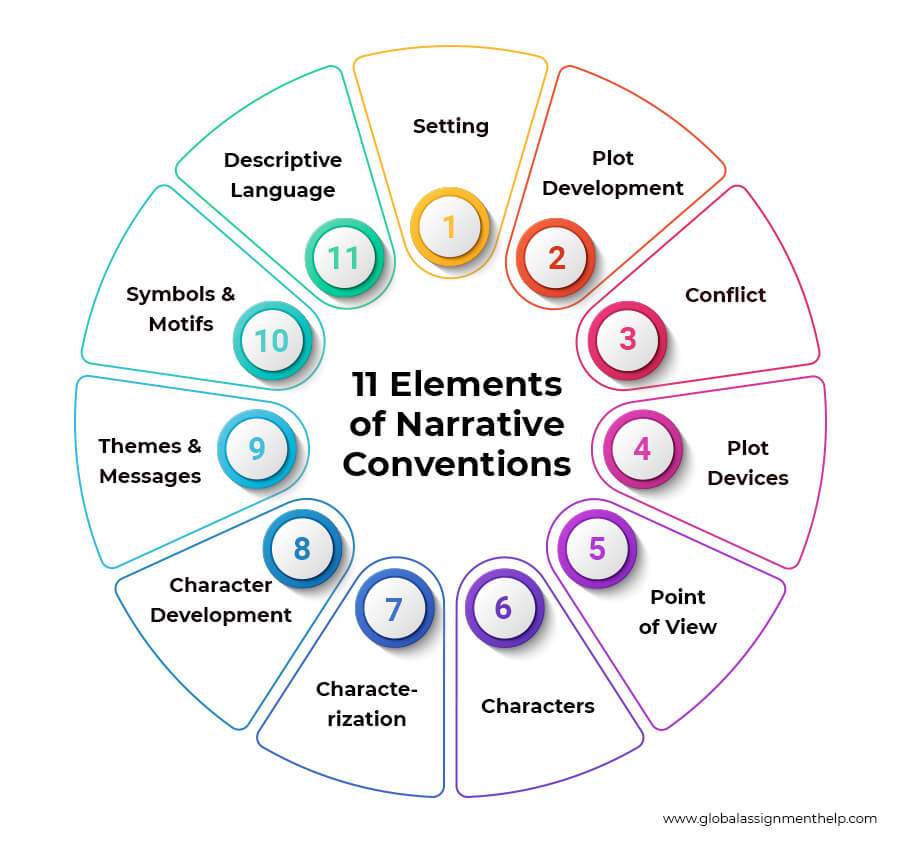 Here is a brief about the elements of the narrative conventions with their effects. It will help you understand the concept more widely.

Setting -The time and place in which a story is established.

Time setting: Literally, it refers to the time of day, season, or history in which a story is setâ€”for example, the Second World War.

Place setting: It refers to a general geographical location where a story is set. For example, a particular country, planet, a school, courtroom, a family kitchen, or a more specific location.

Plot Development -What happens in a story, to whom, when.

Typically, the plot or the structural development of a story includes the following stages:

Exposition (Orientation): The story opening, where the essential characters and the setting are introduced to the audience. It gives some hints about the plot to come.

Complication (Rising Tension): The occurrence of a point of conflict or difficulty upsets the status of affairs.

Falling Tension: It is the part from the moment after the climax to the story conclusion. At this point, the conflict resolves between the protagonist and antagonist.

Climax: It is the turning point that marks a change that may be better or worse for the protagonist.

Conclusion (Denouement): At this story point, all the loose ends tie up together, all the questions are answered. The story has reached a satisfactory conclusion. If there are some issues satisfactorily unsolved, it is because the writer wishes to deliberate the viewers to continue.

Conflict -The opposition or struggle between characters or forces in a text.

There are four common types of conflict:

Man against man: It involves the stories where characters are against each other. It is called external conflict. It can be a subtle or direct conflict between the intentions and desires of two or more charactersâ€”for example, a fight.

Man against society: It involves the stories where a character stands against the system. In such stories, social norms frustrate & force the characters to make moral choices to achieve their dreamsâ€”for example, slavery, bullying, or dominant social conventions.

Man against nature: It involves the stories where a character struggles against the environment or a specific force of nature.

Man against himself: It involves the stories where a character overcomes his own nature and chooses between paths. It is called an internal conflict. For example, behavior can be their weaknesses or intrinsic values, good or evil, and logic or emotion.

Flashbacks: It occurs when the narrator adds the past event's visions in a consecutive story, which serves as a back-story and tells the main story.

Foreshadowing: It is a technique by which the narrator provides hints or clues about scenarios that can happen in the future story.

Reflective Codas: They are the hooks. This character comes as an older or wiser person in some parts of the story. It reflects on the events of the main narrative.

Point of View -The author's choice of narration in which the narrator relates to both the reader and the described fictional world.

First Person: In this type, the viewpoint of a character is presented within the story. It only shows the thoughts, feelings, and experiences of that character to the audience, which means it will only show what the character knows and sees. For example, the story uses the pronouns I, me, we, or us.

Second Person: In this type, the narrator is addressing the readers in the story. For example, the story that uses the pronoun you.

Third Person: In this type, the narrator is not a character of the story but is an outside individual. This person knows everything about every aspect, including the time, people, places, and events within the anecdoteâ€”for example, the story that uses pronouns they, them, he, and she.

Third Person Limited: In this type, the story narrator is not a part but is an outside person. The authors know everything about every character, but the readers only have access to one role. It does not describe anything which is not known to or seen by the focal persona.

Characters- There are several terms used to describe the characters within a story, but the two most common are:

The protagonist: It is the main character of the story.

The antagonist: It is the person who opposes the central character.

Characterization -The method an author uses to acquaint the reader with the characters.

There are two types of characterization:

Characters can be created indirectly through their:

Appearance: To determine a character's personality, preferences, values, and attitudes. For example, clothing, hairstyles, and posture.

Behavior: To determine the character's behavior. For example, walk, gestures and mannerisms.

Dialogue: To determine the character's values and attitudes, emotions, culture, race, and level of education.

Thoughts/Feelings: It is used to determine the character's particularly private beliefs, insecurities, and fears.

Relationships & Interactions: It is used to determine the connections that they have with other characters.

Character development is the way a character grows and changes with the flow of the story. It is often brought about by internal conflict.

Convention 9: Themes & Messages -The central ideas or topics explored by the text.

A theme is the summarized writing to reflect the central idea that the text is aboutâ€”for example, relationships, cultural differences, the loss of innocence, environmental destruction, and human nature.

A message is a statement that explains what the text says about that topic. For example, childhood ends when humans lose innocence, and human nature is brutal and harsh.

Symbol: Something that has its meaning but suggests others as well. For example, person, place, event, or object.

Motif: Something that has symbolic significance in the story. For example, a recurring element.

Imagery: The language used to describe a scene, person or action vividly or figuratively that can create a picture in the reader's mind.

Sensory imagery: It is the language used to stimulate the reader's sensesâ€”for example, sight, smell, taste, hearing, and touch.

Figurative language: It is an expression used to make the meaning of a phrase or sentence different from its literal meaning. It is often used in order to compare or highlight something.

Figurative language includes devices such as:

Simile: The device that compares two things using "like" or "as." For example, music is like medicine for the soul.

Metaphor: The device that compares two things directly. For example, music is medicine for the soul.

Personification: The device that gives a non-living thing human characteristics. For example, The piece of cake called out to me.

Hyperbole: The device that makes a point with an extreme exaggeration. For example, I have a million things to do.

These are the various elements of narrative elements and their effects, which you can inspect in the story. Now, you may wonder why they are so important. Why do we require them in our writings? You will get your answer below.

Why Are Narrative Conventions Important for Literary Writing?

a) Help us experience the readings with our imaginations.

b) Refers to more creativity in writing style and composition.

e) Help me understand the genre of the story.

f) Create a connection between the writer and the reader.

These are the points that reflect the importance of narrative conventions and their elements in brief. Hope, now you know about the conventions in brief. If you have this as an assignment writing topic and finding it hard to write, you can come to our writers for assistance.

Where Can I Get the Best Academic Writing Help?

How can I write my assignment in 2 days?

How to make my paper impressive?

There are no such question if you want the best writing for your academic tasks; there is only the answer that is online assignment help. Reach the best writers and get top-notch work for your projects without any delay or errors.

There are a lot of benefits to taking help with homework. Some of them are listed below.