Statistical Analysis Of Weather Data On Humidity Of Bradford

The report will be discussing the statistical analysis of weather data on humidity. This will be representing descriptive analysis methods used by the experts. For measuring the data descriptive analysis using mean, median, mode, standard deviation and range method. The report is based on the data of humidity of Bradford. Predictions have been in the report using regression methods. The report will provide understanding of the above concepts using calculations.

1) Arrangement of Data into Table

Chart on Humidity of Brad ford 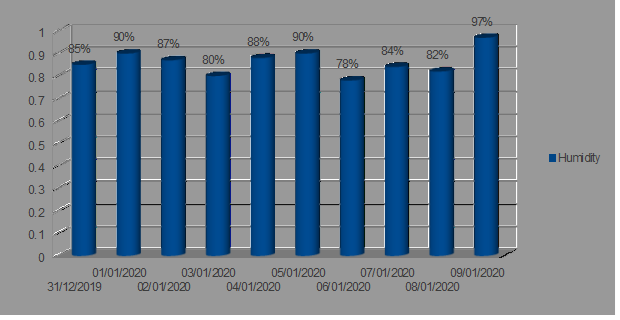 Line Chart on Humidity in Bradford 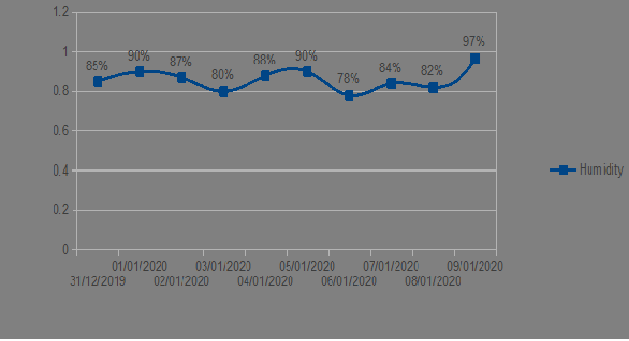 In analysing the data descriptive statistics is an essential tool used by the analysts and experts at the initial level. The tools is used widely as it provides the basic level of information to identify the the direction towards which variable is heading. The methods involved in calculation are mean, median, mode and standard deviations.

Mean refers to the tool which is used by the experts and analysts in their research for analysing the provided data properly. This is among one of the essential tool that is used in the descriptive statistics. It calculates the average performance of variable (Holcomb, 2016). The given mean table represent that the mean value is 86.10% of humidity reflecting the average humidity of in Bradford during ten days is around 86.10%. If the humidity level of the Bradford increases beyond the given level in table will increase the average humidity.

Median is used for classifying the data sets into two parts and this makes the analysis simple and easy. Big data could be analysed using this method. The median value of given data set of humidity is 89%. The value of the median represents that it will be declining slowly sut again shows a fluctuating increase. So this could be said that median helps in analysing the data related to any variable.

Students Also Like to Read About : Implementing Research Methodologies in Curve Company

Standard deviation refers to tool indicating the variations occurring between the variable values. In the below table standard deviation is calculated to 0.054. The deviation between variables is not high (Young and Wessnitzer, 2016). On this analysis it could be interpreted that variables have not much deviations from mean value.

4) Forecast and Calculation of M & C

Forecasting the humidity on 15th and 20th day

Forecast for the 20th day

Humidity during the 15th day will be 91.9% where on the 20th day it would be 92.9%. Interpreting the above data it could be analysed that the humidity will be increasing in Bradford in the coming time. For making the predictions for future period equation of mX + c is used (Norman, Mello and Choi, 2016). Value of m on calculation is coming to 0.002 and the value of c is 0.889. Value of X is changing in both the events. The value obtained is 91.9 when the value taken is 15 and 92.9 is obtained on calculating the value taking 20.

The above study shows that the descriptive statistics is of great importance for the analysts. Users of this tool can develop an basic understanding about the variables in appropriate manner. Descriptive analysis is also used by business firms for making systematic analysis of the data using the tools. Thus carrying out the about research it could be concluded that the humidity level of Bradford in coming years will be increasing.