The area and aspect in which a company or an organisation deal with the different financing sources as well as capital structure which are related to the financial department is known as corporate finance. Apart from this in the corporate finance there are stock market comes into consideration because it is the key part of every organisation which listed in respective market. There are various number of strategies which are used in the corporate finance for make it better and enhance level of profit. Further, the present case study is based on the Glaxosmithkline (GSK) company which is operating in the Pharmaceutical, Consumer goods and Biotechnology industry. Apart from this it is a public limited company and having global presence. The current study shows about the discount rates, dividend policy as well as capital structure of the GSK in context to the stock market. Beside this, the study describes about the valuation of stock and dividend using different dividend ratios and models. Moreover, the study helps to reader to analyse corporate life cycle of chosen firm using four aspects. At the end of report, it describes about the shareholder value performance of the GSK and compare with the AstraZeneca (AZN) company which operates in the same industry.

1. Calculation of Cost of Equity, Cost of Debt and Weighted Average Cost of Capital (WACC) of Glaxosmithkline (GSK)

In the financing world there are different kinds of elements and available which helps to management in order to assess its performance. When a business entity going to expand the firm and enter in new market then it requires fund and capital which is provided by the several sources of finance. Further, such all the financing sources imposes cost and charges in different forms on the firm which uses its financing services. There are mainly two costs are analysed using different formulas which are such as cost of equity and cost of debt. Moreover, cost of equity associated with the equity financing while cost of debt associated with the debentures which are denoted by Ke and Kd respectively (Jorda, Schularick and Taylor, 2016). On the basis of such both the costs Weighted average cost of capital (WACC) is to determined of the firm. Furthermore, Ke, Kd ad well as WACC of the GSK firm calculated and interpreted as below:

It is an aspect and cost related with equity financing which allow to the companies for provide financial resources. Apart from this, it shows that the shareholder's required and expected rate of return is up to which level behind investing money in GSK. On the basis of such factor the management of firm analyse that how much expected return will be there with the stockholders. It is explained along with calculation with reference to GSK as below:

From the above tables of the cost of equity analysis it can be analysed that Ke of GSK was 0.64% in the year 2012 which increase in the further year up to 1.09%. Afterwards it starts to reduce and reaches up to -0.71% in an accounting period 2015 which is good for the GSK. In the financial year 2016 it again increases from -0.71% to 1.12% which shows that the company issues more amount of shares and provide dividend on it. It can be clearly said that required rate of return of the GSK is fluctuating every accounting year and if it reduces then profitable for it.

Apart from cost of equity there is cost of debt is also associated with the firm behind taking and raising capital from debentures. When the firm has more amount of debt then company has to pay higher cost which is not fare for it (Li, 2015). Furthermore, range of cost of debt of the GSK over the five years is shown such as follows:

The aforementioned table of cost of debt (Kd) shows that GSK raising capital and fund from the debentures on increasing trend from FY 2012 up to 2014. Because of this cause cost of debt increase from 11736.8 GBP to 12672.8 GBP from the FY 2012 to the 2014. Apart from this at the end of accounting year 2015 and 2016 cost of debt reduces which are such as 12259.2 GBP and 11728.8 GBP respectively (GlaxoSmithKline PLC ADR, 2016). On the basis of the analysis it can be said that GSK not taking financial resources by issuing debentures in the market which lead to reduce the cost of equity in last two years.

Along with the cost of debt and equity another model used by the company is Weighted Average Cost of Capital which helps to analyse and determine total cost of the capital. It is the combination of two types of costs which are associated with the equity and debentures (Cole and Sokolyk, 2016). On the basis of this the GSK able to know and analyse total costs and expenses which are firm needs to pay against raising fund. Calculation and interpretation of WACC with reference to GSK is given as below:

According to the above table it can be interpreted that GSK had WACC 1.31% for the FY 2012 which is increase in the further year and goes up to 1.62%. By this it can be said that in this period the management giving more cost of capital which lead to negative impact on the profitability. Apart from this, from 2013 to 2014 it reduces which is such as 0.13% by which it can be said that GSK having lesser amount of debt and equity. After the period of 2014 the WACC enhances up to the FY 2016 and value of it in such year is 1.77%. Hence, it can be analysed that GSK has more amount of equity capital as well as debt which lead to increase the WACC. Higher and increasing trend of the WACC is unfavourable for the firm because it affects to the profit level in negative manner.

It can be analyse that capital structure of the GSK is such as 2.53 in the accounting year 2012 which continuously fluctuating over the five financial years. The capital structure is to expressed using debt to equity ratio and when there is the current ratio is higher, then shows that company not having appropriate strategies for raise the fund. It can be clearly analysed from 2012 to 2015 the capital structure of GSK is higher but in this period all the values are nearby. Apart from this in the year 2016 the management of GSK having higher proportion of debt compare to the equity which is not good for it.

1. Calculation of dividend changes over the period of five years 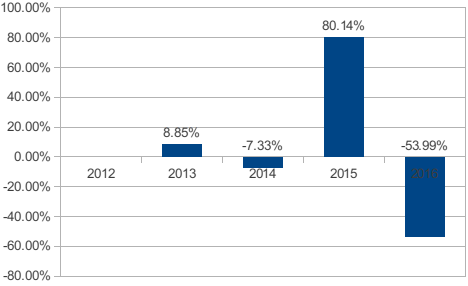 The above mentioned and formulated graph shows that GSK provides and allows dividend amount to the shareholders in very fluctuating pattern. From the fiscal year 2013 to 2014 the dividend changes reduces which is from 8.85% to -7.33%. Apart from this, it increases as well as decreases with the higher amount in 2015 and 2016 at where percentage change is such as 80.14% and -53.99%.

2. Critically assessment of the dividend pay out by GSK

It can be clearly said using and analysing the above graph that company does not provide with effective and proper dividend strategy which lead to make changes in each and every year. It has not proper, appropriate as well as stable dividend policy and strategies by which the respective figures are fluctuating. By analysing facts and figures of net income of GSK it can be said that the firm providing dividend on the basis of its financial performance. When net profit of the GSK is higher and lower, then it gives dividend according to the same direction (Cassar, Ittner and Cavalluzzo, 2015).

In year 2014 it reduces the dividend amount up to 7.33% because net income also decreases from 5436 to 2756 GBP. Apart from this in the year 2015 change in dividend amount is such as +80.14% and the reason behind is that NP enhances from 2756 GBP to 8372. Moreover, in the year 2016 the GSK earning net profit worth of 912 which reduce with high rate from FY 2015 by which the management having -53.99% change in the dividend policy or amount. Hence, it can be clearly said by comparing figures and level of net profit as well as dividend amount that GSK gives dividend according to the financial condition.

It can be analysed in terms of dividend consistent that the GSK business entity provides dividend amount to the shareholders by considering value of the net income generated. As the net profit of the GSK increases from one FY to other year then company gives dividend with the increasing trend. On the other side as level of the net income goes down then GSK declines ration and amount of the dividend for the shareholders.

The valuation is related to the financial process which helps to the business entity in order to determine worth of the firm in the stock market. When there are valuation level of the company is higher, then it shows that management able to generate more amount of profit and gives high return on investment amount of shareholders (Johnstone, 2015). There are mainly two types of ratios are used for static valuation of the GSK which are calculated as below:

From the above tables of static valuation it can be said that GSK having price earning ratio with fluctuating trend from the FY 2012 to 2016. Along with this, there is dividend yield ratio is also fluctuating over the periods of five years. From the financial period of 2012 to 2014 the PE ratio increases from 25.68 to 49 which shows that GSK having better performance in the stock market and earns more higher amount behind every shares. Afterwards, in the FY 2015 PE ratio reduces which is such as 13.38 and the improves in the year 2016.

In the last accounting year the company having the highest PE ratio which clearly indicates that it has better performance. Along with this, as per the dividend yield ratio management of GSK gives dividend with the fluctuating trend by which shareholders profit and return on the equity investment changing in every financial year. In the year of 2015 GSK provide the highest dividend amount to the shareholders and lowest in the accounting year 2016 which are such as 2.71% and 1.34% respectively.

There are different types of methods and techniques which help to the company in order to determine facts and figures about the growth of dividend amount paid by it to the shareholders. In context to this, in the current case Dividend growth model is used by GSK which is shown as below:

As per the current analysis and calculation of dividend growth model it can be said that company not able to grow in context to the dividend aspect. On the basis of it intrinsic value of GSK for the FY 2012 is such as -11.01 which declines and reaches up to -12.91 in the next year 2013. In context to this dividend's intrinsic value is such as -9.00 and -16.45 GBP in the accounting year 2014 and 2015 respectively. It shows that company not having effectual and positive performance in the stock market in terms of providing amount of dividend to the shareholders. At the end of the FY 2016 GSK having intrinsic value of dividend is worth of -9.97 GBP under which it has lower dividend yield as compare to previous one.D