The contingency approach is referred to as the leadership and management style in which there is no fixed pattern of style is being followed to lead the workforce. It depends upon the context of the prevailing situation and based on that the style is being adopted. The change is a force which can occur at any time and prediction of its impact can't be assessed. Based on the situation and change force the leaders and managers adapt style to manage it effectively.

The contingency approach of management refers to the approach which states that there is no one best-suited leadership and management style which can be best fitted or suited to any situation. The leader and manager should understand the context of the situation and based on that they should design their style of managing. In order to be effective, the practices must be aligned with the organisation internal and external factors. The internal harmony should be maintained while making cohesiveness with the external environment. The change in any situation, factor etc. cannot remain constant. They keep on changing theretofore, the policies, procedures and process of an organisation also cannot remain the same it is being changed constantly to achieve congruence with the changing macro environment.

The Change is an inevitable process, it a true bitter reality to exist in this world. To remain efficient and ongoing in this world one needs to be keep pace with changing models and environment. The organisational change refers to the series of actions taken by an organisations to adjust to the changed environment. There are various reasons which occurs in an environment such as change in an economic factors, change in technology or other processes. Therefore, the change management process is the sequence of steps which is being taken by the organisation in order facilitate that change as part of organisation system. The change may include change in company culture, processes, technology or strategic intent. The organisation change may be either adaptive or transformational. The adaptive change refers to the small and gradual changes that an organisation takes up to upgrade its products, processes etc. The examples can be little modification in policy such as work from home policy as the coronavirus pandemic erupted, providing flexi working policy top ease the employees working etc. The Transformational change refers to the major changes which an organisation undertakes. Such as, expansion in product portfolio, expanding globally etc. are major decisions which an organisations take. The change management is the structured process which an organisation follows right from the inception to being change to implementing it successfully. 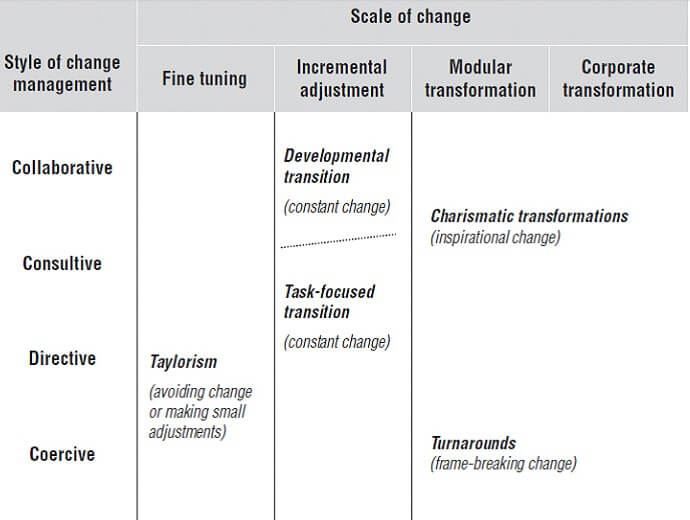 The degree of change does not matter, the efficiency depends on how effectively an organisation makes pact with change. At every part there are resistants in organisation, who does not make any change easily facilitated. The change agents and leaders are being made by the organisations who teaches, guides and supports the employees who are resisting the change. These agents depending on the level of change acquire the style of managing and makes the implementation of change successful for an organisation.

One such example is digital marketing. The emergence of digital marketing disrupted the marketing scenario. The whole industry was affected with the emergence of the digital marketing. There was lack of proper knowledge regarding the effectiveness and working of digital marketing. But bit later, the scene changed and everyone was accompanied in this journey of digital marketing. The digital marketing itself emerged as one field and grown its wings which served employability to many people. Even the bigger gigs to smaller firms are taking use of digital marketing to promote its lead. The another example is big data, which is being used by many companies to harness its benefits. The incorporation of big data is one such emerged technology which is driving the organisation to use it as part to increase its efficiency. The big data refers to collection of large volume of data and systematically structuring it which gives an proper analysis of the customer activities. The understanding of this analysed data gives organisation an competitive edge. As, digital footprints being left behind by user gives an great insight to organisations which results in increased efficiency and huge cost savings. The cost so saved can be used productively by the organisations in other processes to increase their effectiveness. To make all such changes effective the contingency approach comes into play. The leaders and mangers by ascertaining the impact of such changes adapt an style which makes an organisation ready to accept that change.