Expanding a business not only helps in increasing profitability but also assist in enhancing overall customer base (Venables and Ripley, 2013). The report makes comprehensive discussion regarding Duque Papetiers Gros, which is planning to start its operations in Germany. The report provides numerous statistics that will help in analysing that whether investing at new location will prove to be profitable for the organization or not. Sales forecasting and analysis of trend will also be initiated for better as well as effective results.

1. Overview of the wholesale stationers market in Germany

In Germany, the wholesale market is known to be very crucial for the nation because it provides assistance for achieving a good amount of overall income to the country itself for an example the gross domestic product gets increased for a particular level. There are some evidences from many facts that several materials for writing which are vigorously used in Germany which depicts that the spending which are done annually associated with nation is considered very high in comparison to other European Countries. The total sum of turnover which is counted annually of the related stationery market is €14.8 billion which determines the main reason for the Germany's growth in respect to its economy. Along with that around €35.2 is spent on materials for writing by all consumers and it results to mark and also rank it as the number second across the EU (Matsunaga and et.al, 2017).

With the contrary aspect of the provided fact that with the emergence of the effects which are generated by digitisation has prevailed very quickly across the world and the products which are mostly documented folders that have suffered declination mostly in these past years. This has lead to affect the market of wholesale stationers in an adverse manner. The major reason for the growth of this particular market is mainly that wholesalers sells their product to the consumers directly without the involvement of any retailer.

With the implementation of this particular strategy, they are successfully able to earn a generous amount of the revenue as an expense which are reduced to almost up to a higher extent. With respect to this aspect, it has been observed that there is an increasing growth and also profits of various stationers, many big firms related to pharmaceutical field has expanded and further diversified their respective businesses for obtaining profits from this selected sector (Compagnino, Romano and Zuccarello, 2017). Thus, it can be stated that stationary markets in Germany has faced frequent growth for their business.

2.1 Representing annual sending on stationary in Europe in graphical format

Graphs have always been the best measure to analyse and interpret the results. It helps in finding out difference between two areas just by looking at pictorial presentation. The below graph prepared helps in presenting overall spending of customers in different territories of Europe on annual basis (Dey, MüIler and Sinha, 2012). The representations have been done in per capita format. Similar unit value has been used to ensure that comparisons between them can appropriately be presented (Lu and Ouyang, 2013). The graph represents that Switzerland tends to spend the highest in writing material, that is 35.5 Euros of spending. The spending of Germany is slightly low in comparison to that of Switzerland, that is 35.2. The third rank has been achieved by Austria whose annual spending have been 35 euros in overall per capital income. Next position has been grabbed by France with annual spending of 28.3 Euros among all European Countries on annual basis. Fifth rank is given to Slovenia which has been able to gather annual spending of 20.4. 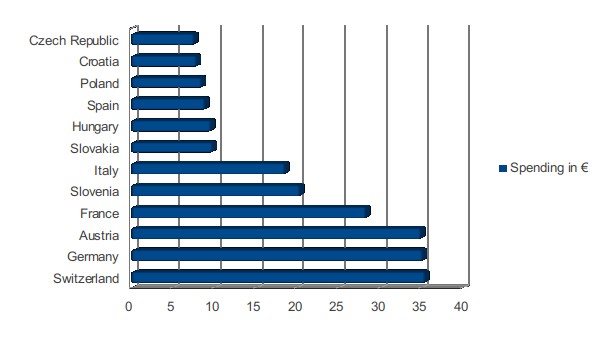 Italy have been able to gather sixth position with 18.6 Euros annual spending of writing material based on annual spending in per capita format. Other places are gathered by various other countries, such as, Hungary, Spain, Poland, Croatia and Czech Republic. Further, analysing the per capita income of European Countries, it can be analysed that Germany stands second on annual spending of writing material. However, first place is gathered by Switzerland (Schermerhorn and et.al., 2014).

3.1 Analysing the data of sales based on financial data provided 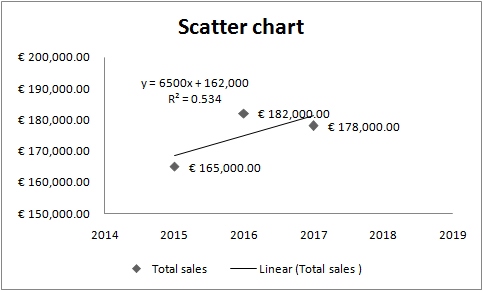 Interpretation: Analysing the above diagram, it can be interpreted that, the graph represents calculation of correlation coefficient (Correlation Coefficient: Simple Definition, Formula, Easy Steps, 2018). Correlation is considered to be a useful technique that comes under the periphery of statistics. It helps in analysing the relationship between two variables. The technique was initially developed by Pearson. Its usage states that it is important aspect and prove to be quite useful for various business purposes (Ru and et.al., 2013). The data collected by Duque represents that the overall sales being conducted by it were effective enough. The calculated value of correlation is 0.73. It also tends to present positive and strong relationship between the two variables. Positive value helps in representing positive correlation between the two factors. Further, it can be analysed that it would prove to be quite profitable for the organization to expand its scope in Germany (Heizer, 2016).

Considering the equation of scatter diagram, sit can help in forecasting the trend line of 2018 and 2019.

The above table shows whether business should be expanded in Belgium and Germany or not. It is carried out to effectively analyse whether it would be feasible to expand in nation and whether adequate sales will be attained with much ease. The table can be interpreted that firm will be able to achieve required sales in the best possible manner. It is evident from the fact that Stationary market of Germany is one of the biggest market which would be beneficial for Duque Papetiers Gros to attain desired objectives in effective way. It can be referred to overview of market that customers' spends a lot on stationary products and as such, it is an opportunity for firm to garner higher profits in effective manner (Boerschinger, Svitavsky and Yoder, 2017). The table shows that there are more pros in comparison to cons in expansion program. It can be said that firm should expand to Germany for enhancing sales and profitability up to a high extent.

There are several benefits in expansion as customer level of satisfaction will be maximised, revenue and scale of operations of business will be increased as well. It would be helpful for Duque Papetiers Gros to increase revenue by expanding to German market. The paper and stationary products will be provided to commercial customers and more diversified items will be sold by it to the customers in the best possible way. This will eventually lead to large scale of operations quite effectually. On the other side, there are various cons as well such as increased costs and more requirement of capital. However, firm will be able to carry out operations with much ease and will be fruitful for it (Rönnberg, 2017).

There are various international standards which are required to be followed by the business so that uninterrupted operations can be attained up too much extent. These standards are applied to firm which are listed as under-

The international standard explains that business when continuing operations should take into account society's perspective by which welfare may be maintained in the best possible manner.

The ISO standard is dedicated to employee's safety. It means that organisation must replace existing standards in order to impart safety to workers in the event of any uncertainties prevailing in organisation.

Students can take assistance from expert writers and get HND Assignment Help with zero plagiarism.

Applying formula, we get

For converting in monthly payment

Hence, mortgage cost is required to be incurred in expanding business operations to German market in effective manner.

Applying formula of z test, we get

The z test is being applied at the significance level of 5 %. It can be analysed that null hypothesis is accepted because z score value is more 0.5. It is 0.5910 implying that there is as such, no significant difference between sample and mean value of orders. Normal distribution curve is being applied for calculating z score.

The responsive rate is less than 5 %. It is suggested that firm should impart short questionnaires which are duly filled within time frame by respondents. Moreover, main purpose behind collecting information through questionnaire should also be made understandable to them and as such, they will answer and responsive rate will maximise up to a high extent (Hribar and Yang, 2016). Furthermore, some incentives may be imparted to them when questionnaire is duly filled by them. Hence, by implementing such ways, customers' will answer to questions asked by firm.

It can be interpreted that prices are charged are fair. Value of standard deviation and that of mean is near to 2. For achieving rating of 4, it is required that costs should be reduced.

Hereby it can be concluded that firm will be able to attain good amount of revenue by expanding to Germany. It is evident from the fact regarding past sales data of firm is good enough and is able to make good quantum of profits. Furthermore, German stationers market is second largest in terms of annual spending which means purchasing power is remarkable that is again a plus point for firm. Descriptive statistics is also being carried out showing that firm will be able to sell stationary and paper related products to commercial customers and profits would be attained by it. Hence, it should expand to Germany for fruitful results. For more you can contact online assignment help experts, Chat Now!

Are you in need of business plan assignment help? You have come at the right place. The writers of Global Assignment Help have top qualifications in business studies and great writing skills. We have been providing business decision making assignment help for years. One of the most frequent queries for our writers is about international business strategy assignment help which we fulfill without any hassle. Shoot your queries now and get the best solutions!